Survey: One-Third Of Americans Plan To Use Stimulus Checks To Pay Bills As the coronavirus pandemic extends into an uncertain future, Americans are now seeing their stimulus checks deposited in their bank accounts.

These one-time payments from the government can be as much as $1,200 per individual (with no children) and are aimed at keeping the country afloat as the economic consequences of the COVID-19 pandemic continue to rip through the economy. Already, 22 million Americans have filed for unemployment since the coronavirus crisis began, and the number of unemployment claims is expected to rise to as many as 37 million by the end of May.

So it’s good news that Americans are getting financial assistance. A new survey by YouGov for Forbes reveals just how Americans are planning on spending these stimulus payments—and showcases stunning truths about their economic security before the pandemic.

Most Americans Say They’ll Spend Their Stimulus On Bills, Savings and Essentials 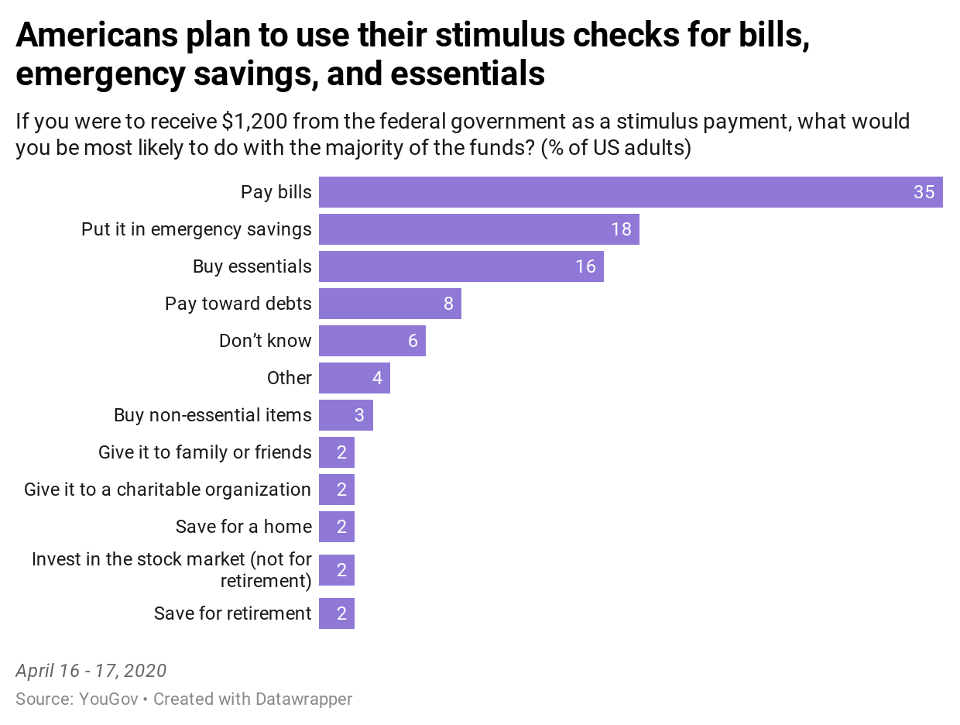 The desire to use stimulus payments to pay bills shows just how financially crunched most Americans might be, including those considered to be middle class. As millions are now without work, the stimulus checks are covering basic financial obligations such as rent, mortgages, electricity, food, etc.

Many state systems are overwhelmed with the unprecedented amount of traffic they’re experiencing. Plus, there’s the puzzling (and time-consuming) question of how states will calculate benefits for self-employed individuals who typically don’t qualify for unemployment insurance, but are now included under the Coronavirus Aid, Relief and Economic Security (CARES) Act.

These results dovetail those of a recent survey by the Federal Reserve Bank of Cleveland, which looks at how Americans are responding financially from the onset of the pandemic in March to now.

According to the Cleveland Fed survey, consumers have been increasingly changing their financial planning (voluntarily or out of necessity) as the coronavirus outbreak intensifies. This includes an increase in personal savings, which the Federal Reserve Bank of Cleveland describes as a potential “precautionary savings motive.”

Though the stimulus checks are a good opportunity to build a cushion should Americans find themselves out of work in the near future, it’s also a telling factor of just how many Americans were unprepared for unexpected drops in income. 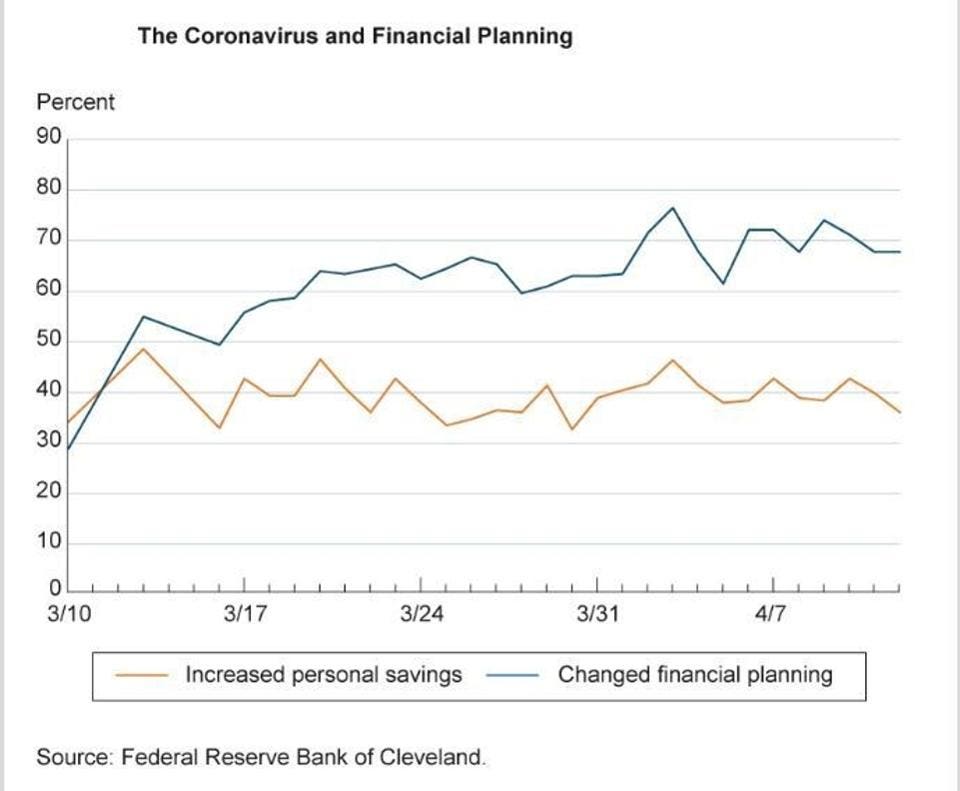 Data from the Federal Reserve Bank of Cleveland

Not Many Americans Using Stimulus Checks to Pay Down Debt, Save For Retirement

While it makes sense—take care of essential payments now and save as much as possible for what’s to come in the immediate future—Americans carry record consumer debt levels (it rang in around $930 billion in the fourth quarter of 2019, according to The Federal Reserve), and their current debt loads will eventually come back to bite them.

According to our survey, there was little interest in spending stimulus checks on ways that don’t immediately affect the recipient, such as giving it to family or friends (2%), giving it to a charitable organization (2%), saving for a home (2%) and buying nonessential items (3%).

Overall, it’s clear: Americans are planning to use their stimulus payments to hang on financially right now. Everything else is low priority until the COVID-19 crisis is over—and as of now, no one has much of an idea of when that will be.