COVID-19 Checks: Over 1,000 Americans Divulge How They Plan to Spend Their Coronavirus Stimulus Check In a few short months, the new coronavirus has changed everything about the way we live. With nearly 900,000 cases of COVID-19 confirmed globally at the time of this writing and nearly 185,000 confirmed cases in the U.S., a World Bank report has estimated that COVID-19 could push 11 million people around the world into poverty.

With many U.S. cities operating under stay-at-home and shelter-in-place directives, the travel industry, restaurateurs, and millions of service workers across the country are out of work, and many are without pay. The economic freeze as a result of COVID-19 could result in 47 million lost jobs in the U.S. and push the unemployment rate in America past 32%.

To help combat this potential economic crisis, President Donald Trump signed into law a $2 trillion stimulus bill that, among other things, would supply Americans each with a check for up to $1,200 and an additional $500 per dependent younger than 17. While checks have yet to be dispersed at the time of this writing, we asked over 1,000 Americans how they planned to spend that money. Here’s what they told us.

A majority of people expecting to receive a stimulus check as a result of COVID-19 planned to spend that money on groceries (nearly 47%) or bills and utilities (over 46%) or deposit it into their savings (around 42%). 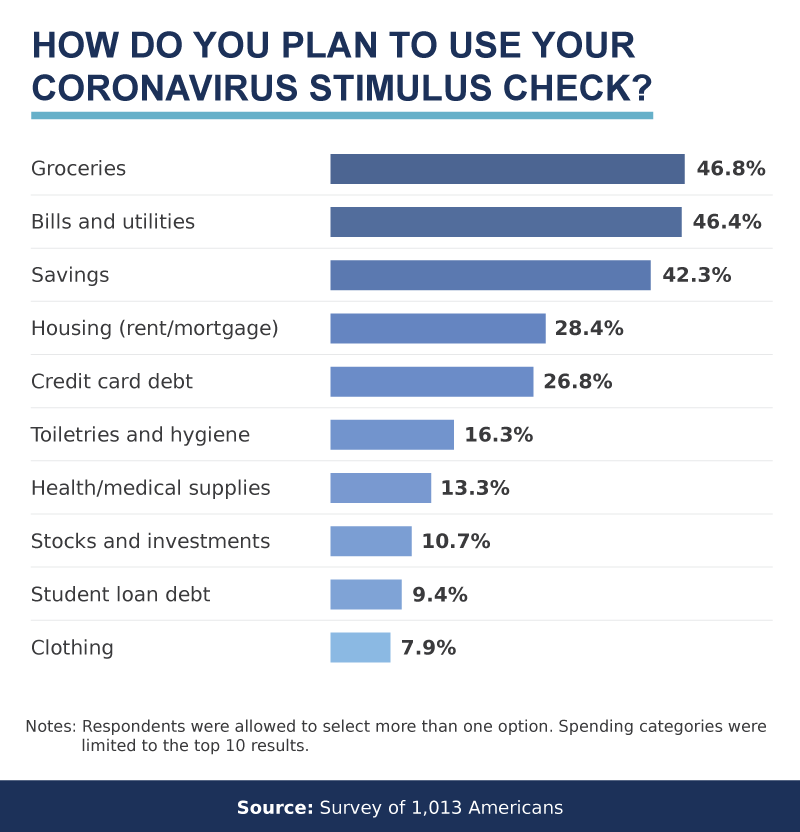 As a result of shelter-in-place directives issued by many cities, a majority of Americans are eating at home rather than dining out or ordering takeout. Experts encourage Americans to have their groceries delivered if they can afford the expense to comply with social distancing recommendations.

According to the U.S. Department of Agriculture, the average American spends between $96 and $371 on food every month depending on where they live. On the high end of the spectrum, a $1,200 stimulus check could cover the cost of groceries for one person for several months as long as they didn’t spend the money on anything else.

More than 1 in 4 people polled planned to use their stimulus check to cover housing costs (including rent or a mortgage), and nearly as many will be using the money to pay toward their credit card debt.

While around 1 in 10 respondents planned to use their check for stocks and investments or student loan debt, millennials were more likely than other generations to want to spend their stimulus money in these areas or on housing.

Unemployed respondents anticipated spending even more of their stimulus checks (72%) on essential purchases, followed by self-employed Americans (57%). In addition to providing freelancers and gig workers with stimulus checks (if they meet the income qualifications), the stimulus bill would provide these workers “half the average unemployment in their state” and an additional $600 per week.

Millennials expected to put the most toward essential purchases – over 54% of their stimulus check – compared to around 53% for Gen Xers and nearly 47% among baby boomers.

Americans may not know when their stimulus check will arrive, but they already know how they’ll be spending it. Essential purchases, such as groceries and utilities, were common responses on how to spend the maximum $1,200 (with an additional $500 for dependents); however, many Americans also planned to put that money toward their debt.

People who identified as unemployed or self-employed were the most likely to spend their stimulus cash on essential purchases, while the average salaried or hourly employee estimated spending slightly more than half of their check on nonessential purchases. And despite claims they might be irresponsible with money, millennials were more likely than any other generation to anticipate using their stimulus check for essential spending.

We surveyed 1,013 eligible Americans about how they plan on spending their coronavirus stimulus check using Amazon Mechanical Turk. To be included in the study, respondents were required to complete the survey in one attempt and pass an attention-check question in the middle of the questionnaire.

An explanation of the Coronavirus Aid, Relief, and Economic Security (CARES) Act payout was provided to respondents at the beginning of the survey and was available for reference while answering the questions. The study was conducted from March 28, 2020, through March 29, 2020.

The main limitation of these data is the reliance on self-reported responses, which are faced with a wide variety of issues including, but not limited to, attribution, exaggeration, telescoping, and recency bias.

Are your readers thinking about how to spend their stimulus check? We welcome the sharing of these findings with your readers for any noncommercial use with the inclusion of a link back to this page as credit to our team of contributors.